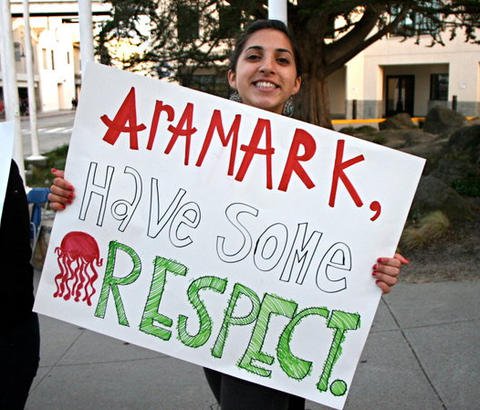 This post is from David Schwartz, Campaign Director for Real Food Challenge.

No, this is not an odd new athletic conference.  But, following a recent 200+ student summit in Baltimore, teams on each of these campuses are competing -- for the most ambitious campus food policy in the nation.

As part of the national Real Food Challenge, student campaigners are urging their college presidents to sign on to the Real Food Campus Commitment, a pledge that would ensure complete transparency in university food supply chains and shift at least 20% of a college’s food purchasing budget to ‘real food’ for their campus dining halls.  Since the 2011 launch of the Commitment, 9 colleges and university presidents have signed on, opening new markets and incentives to local, fair, ecologically sound and humane food producers.

This spring, student activists expect to win an additional $4 million in real food commitments, bringing the total to over $50 million since the campaign’s inception -- a historic tipping point in the broader food movement.

“This is a critical moment," says Carleton College student Lindsay Guthrie, “our generation is inheriting a climate crisis, extreme economic inequality, and unacceptable health disparities -- climate disasters, debt, and diabetes are becoming our new normal. But we’re not standing idly by.”

Indeed, student activists at UNC Chapel Hill were anything but idle as they campaigned to break up the exclusive deals between their university and conventional pork-producing factory farms.  After months of negotiation, they celebrated a precedent-setting deal with a local women-owned pastured livestock operation.

At the University of Vermont (UVM), a recent Real Food Campus Commitment signatory, the school now leads the state with over $600,000 in farm-to-table procurement, a new-farmer training program and countless courses on relevant food justice topics. Upon signing the Commitment, Interim President John Bramley commented:

“UVM can play an important role not just in educating students or researching the issues but by actually seeking to be part of the solution, in the way we choose to feed the 15,000 members of our community. I am proud of the part UVM and its food providers are playing, and of the leadership role our students have taken, in this important initiative and global challenge."

This change has not come without pushback from the conventional agribusiness sector.  When students’ calls for change led top-rated Virginia Tech Dining to switch to cage free eggs, the university soon received angry calls from the state’s industrial egg layers association and their allies in the state’s political establishment.

The campaign has also seen resistance from Aramark – one of the largest multi-national food service companies - which operates cafeterias at 500+ universities.   Unlike some of their competitors, this company has refused to sign on to the movement’s basic transparency standards.

Despite these challenges, in 2012, the movement swelled to nearly 100,000 strong, when students, staff and faculty organized events on 300 campuses across the country as a part of Food Day, a national day of action for healthy, just and sustainable food. Since then, successes at Macalester College and the University of Cincinnati have only fueled the growing fire.

In another surprising twist, the most recent campaign success comes from the Hotchkiss School, a 9-12 grade boarding school in Massachusetts and the first high school in the country to sign the Commitment. This precedent-setting victory illustrates just how far this movement stretches: with 14 and 15-year-olds pushing for a just food system. Oberlin College in Ohio is set to be the 10th signatory in just a few weeks.

This spring, all eyes will be on schools like Johns Hopkins University, Duke University and Williams College, where students are urging their university leaders to sign on to the Real Food Campus Commitment as UVM did.

If they are successful, it’ll mean $4,000,000 in additional purchases for local farms and sustainable food businesses, annually. And, for a whole generation of young people who’ve taken diet-related disease, climate change, and corporate control of food as the norm, it’ll mean a new sense of hope and possibility for real change.

"For many of us who’ve been in the food justice movement for 10, 20 or 30 years now, the Real Food Challenge points the way towards a new phase in our collective work," comments Anim Steel, formerly Director of National Programs at the Food Project in Boston.

“If we focus on organizing our communities to influence strategic institutional targets, we can foster new leaders for our movement and grow our power so as to truly challenge and change the established order.  That, to me, is the real meaning of ‘real food’.”