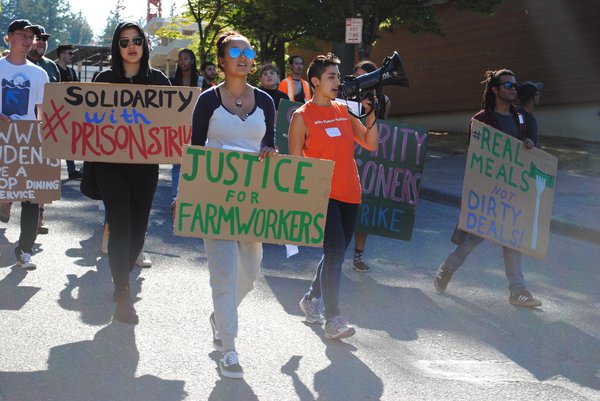 The Community Coalition for Real Meals launched a nationwide campaign today urging the country’s three largest food service management companies  – Aramark, Compass Group, and Sodexo – to reorient their business models away from a system of exclusive relationships with Big Food corporations toward greater investments in real food that support producers, communities, and the environment.

This intergenerational grassroots alliance of farmers, ranchers, fishers, farmworkers, students, and environmental advocates believes food is a powerful lever for social change. The call for Real Meals has been endorsed by over 40 public health, producer, environmental, and social justice organizations.

“Corporate consolidation of our food system is hurting family farmers and their communities around the world" says Dana Geffner, Executive Director of Fair World Project. "We are prioritizing this campaign because in the face of ‘Big Food’ companies’ reckless exploitation of the earth's resources, organizing to broaden access to food that supports our communities and our planet, to put people before profits, and to prioritize fair trade relationships is the only path forward.”

Aramark, Compass Group, and Sodexo manage over half of the country’s cafeterias at institutions such as universities, hospitals, and prisons. Each year these three foodservice management companies purchase billions of dollars worth of food from multinational corporations that pay workers and producers unlivable wages. These corporations also rely on harmful practices such as the excessive use of pesticides and fertilizers that damage our health and the environment, and market highly processed, unhealthy food.

“The reality we’re facing is that the globalized seafood market leads to massive consolidation where the average seafood travels thousands of miles from point of harvest to point of consumption, and is fraught with labor and environmental destruction. We envision a different reality - where ecologically responsible, community-based food producers are able to feed their communities first, are paid a fair price, and those working across the food chain are afforded lives with dignity.” Says Julianna Fischer, Community Organizer at the Northwest Atlantic Marine Alliance.

The Coalition’s Campaign for Real Meals is urging Aramark, Compass Group, and Sodexo to use their massive purchasing power to become an active force for good working conditions, environmental sustainability, and racial equity in the food system. As a first step, the Campaign is asking each corporation to make the following changes in its higher education accounts:

Invest in racial justice and equity

"Aramark, Compass Group and Sodexo have an opportunity to be a true force for sustainability by significantly reducing their purchases of factory-farmed meat and dairy products" says Chloe Waterman, Senior Food Campaigner at Friends of the Earth. “It’s time for these food service leaders to make good on their environmental pledges by cutting their carbon emissions and sourcing more food from local and regional, ecological and organic producers.“

"For too long, companies like Aramark, Sodexo, and Compass Group have prioritized their profits over the health of workers, our communities, our economy, and the environment" said Navina Khanna, Director of the HEAL Food Alliance. "This is their chance to do the right thing by recognizing that farmers, fishers, and food chain workers are the foundation of a healthy economy. Now is the time for these corporations to commit to purchasing food that benefits the health and well-being of the many over the pockets of the greedy few.”

"Aramark, Compass Group, and Sodexo falsely claim to be delivering what students are demanding in the way of good food from local farmers and ranchers. Instead, they are partnering with the biggest, most destructive agribusiness corporations on the planet through an opaque and unethical pricing model that’s delivering the opposite of what students are promised,” said Mike Callicrate, board member of the Organization for Competitive Markets. "As a result, local food system initiatives and independent family farmers and ranchers are failing for lack of support. Holding these companies accountable to their promises will go a long way in supporting our work in building the kind of food system that truly nourishes producers, consumers, communities, and the earth."

“Even though it flies below the radar screen, the cafeteria industry perpetuates major inequities in the world. But people are waking up. These big cafeteria corporations are going to have to make some fundamental changes if they want to satisfy this generation of students who are connecting the dots between their foodservice providers and problems in society.” says Anim Steel, Director of Real Food Challenge.

The Coalition kicked off the campaign with its first action at Western Washington University on September 2nd. Students, food producers, and food justice activists from across the country marched together to expose the harmful practices of Western Washington’s food service provider, Aramark, and demand food service providers instead invest in Real Food and racial justice. In the coming months, the Coalition will be holding a series of coordinated actions across the country to urge Aramark, Compass Group, and Sodexo to meet their real food targets.