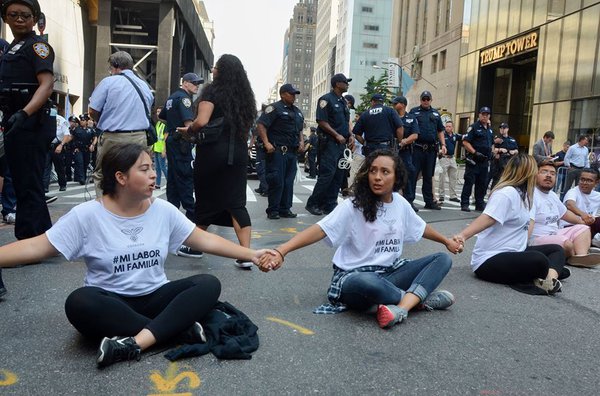 I’m out of jail, grateful for the support and actions so many took yesterday, and in ever deeper awe of the young leaders who marched without documents AND without fear.

This was the first time I took a higher risk action. I’m writing about my experience to support others in thinking through the decision of whether or not to risk arrest during a crisis.

WHAT HAPPENED AT TRUMP TOWER

After 9 young DACA recipients were arrested during a civil disobedience action, a dozen of us with US citizenship blocked the street in front of Trump Tower. Our goal, besides expressing our outrage, was to leverage the safety of our US citizenship and wait in jail however many hours or days it took for the first group of arrestees to be released. This was the strategy devised by Movimiento Cosecha, the organization I took action with.

In case it’s hard to tell from the video: a group of Cosecha-trained “marshalls” used the yellow/red lights to stop cars coming west on 57th and down on 5th Ave. Immediately, we walked in a diagonal line across the street and sat down. A crowd was making its way up from 56th at the same time, and so very quickly our chants merged with the others’ and we were enveloped in a flurry of sound, big cameras, and police. From my cross-legged vantage point on the pavement, I couldn’t see too much, but felt connected to my buddies on the right and the left, to our chants, and to a few faces in the crowd. I could barely hear the megaphone warnings from the police, but when the officer behind me told me he was placing me under arrest, I complied.

After we were cuffed with zip ties, the police wagon took us down to NYPD headquarters downtown. We kept up a strong round of chants and songs all the way down, then were processed, stripped of phones/belongings/belts/laces, and separated by gender into holding cells. By refusing to give full identifying information, we ensured that they couldn’t dismiss us before there was word about the DACA detainees -- via calls to our pro bono lawyer.

There was a lot of support and camaraderie amongst the arrestees. In the police wagon, one of my neighbors, a yoga instructor, helped another woman tie her hair back, all while her hands were still cuffed behind her back (another strong case for doing yoga!). We clapped for each new arrestee that came in from protests later in the evening. When we learned in the guys’ cell (a large room with hard wooden benches, cold air, and a loudly flushing toilet in the back) that most of the DACA detainees had gotten out and the rest were likely to, we talked about whether we should finally give our information, as the cops were pressuring us to do with a variety of carrots (“You’ll be home soon) and sticks (“YOU’RE GOING TO JAIL”). Everyone decided to stay until the very last DACA detainee was definitely out, even if it meant being in the system another night or two.

In the end, it didn’t come to that. Just before we would have been transferred to central booking (“The Tombs”) another phone call revealed the earlier detainees were out. It took a total of 9-hungry-but-increasingly-feisty-hours to actually be released (with a disorderly conduct violation), so I made it home in the early morning. Escorted outside by my arresting officer, I was utterly surprised and thrilled to see my wife, Sarita, who had encouraged me in the first place, amongst the Cosecha crew receiving us outside the police barricades with curbside Chinese food and hugs.

When I was asked on camera why I was at the protest, I shared my need to be there “for all the people who work in the shadows to produce the food that we all eat and do so without the dignity and respect and pay that they deserve.” Another motivation was just the knowledge that if someone was going to hurt my sister, there isn’t anything I wouldn’t do to protect her. And that feeling doesn’t stop with my biological sibling.

I questioned whether or not to take action right up until 57th street.Two things helped: I got training - a full days’ worth on Monday, provided by Cosecha. And I got help. My colleagues at Real Food Challenge stepped up to cover me in the event I would be gone a bit. And a friend from college helped me understand what the implications of a misdemeanor are for adopting and fostering, in case we do that (if being arrested meant not being able to make a home for someone else, I would have taken a different role). Even though we hadn’t talked in years, Barbara Kevorkian reached out through her professional networks that gave me some useful information shortly before the action began.

Not everyone can risk being arrested. Some of us are on probation, some of us have dependents, or medications we can’t risk missing. As a Black man (who appears Arab to many apparently), I was extra hesitant. I weighed my circumstances and decided to take action. But there are so many ways to be involved. Something like this doesn’t happen without people passing out water, filming the event, holding phones, liaison-ing with legal help, donating bail money, etc. There is a role for everyone, and organizations like Cosecha enable them.

One thing I am taking away: the more we step into whatever role we are able, the more powerful we become, individually and collectively. I am not un-afraid, particularly for my friends who are most vulnerable, but I am less afraid now than I was two days ago. Also less afraid because the growing numbers of people EXPLICITLY, VISIBLY stepping forward create a tide they ultimately can’t stop.