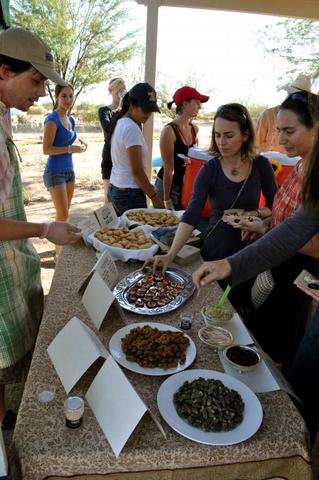 Yesterday, over 225 campuses in 46 states and 4 countries united to celebrate the first ever FOOD Day and to fight for real food on their campuses! After months of dedication, passion, excitement and hard work, events across the nation highlighted the increasing need for a transformed food system in America, starting on college campuses. For its first year, this was an overwhelmingly great response and it truly reflects the desire of college students to be at the forefront of the food movement.

What's next? We are excited to have officially launched our Get Real! Campaign asking colleges and universities to commit to shift $1 billion in food purchasing to real sources by 2020! Check out how YOU can bring real food to your campus.

Read on to catch a glimpse into what colleges and universities did to celebrate Food Day 2011!

In Fairbanks, Alaska, Food Day was recognized with an official proclamation signed by Mayor Luke Hopkins that recognizes the major principles of Food Day, such as access to real food and farm worker rights. The UAF School of Natural Resources and Agricultural Sciences, Cooperative Extension Service and the UAF Anthropology Society hosted events throughout the day for students, staff and faculty members. They hosted an “Iron Chef” cook-off dubbed “Surf and Turf” between the dean of the agriculture school and the dean of the fisheries school. The dean of the fisheries school was victorious with his spotted shrimp dish, however it was a close competition with a reindeer steak cooked by the dean of the ag school. They also hosted a Food Jeopardy game and set up a Taste of Alaska booth as part of a series of food demonstrations and exhibits. The Alaskan cuisine featured grass fed beef, cold smoked salmon, lettuce, tomatoes, rutabagas, onions, carrots, potatoes, cabbage. The Dining Services prepared the food beautifully in kabobs, soups, stews, roasted vegetables. The students in the Anthropology Society showed the films, “Seeds of Deception” and “Fresh,” and hosted lectures on sustainability, fermenting food and ethnobotany. It was a great beginning and they hope to continue their efforts on campus to ensure real food for students and staff.

Real Food activists at the University of Maryland kicked off Food Day with a display of giant paper-mache vegetables on McKeldin Mall, as well as a photo petition asking administrators for more real food options in the dining halls. Later that night, students and community members gathered on the South Campus Rooftop Garden to share in a meal, teach-in, and a concert. The Real Food UMD group had a lot of success starting campus gardens last year, and they're gearing up to start asking the administration to sign onto the Commitment, as well as starting an internship program for people who want to work on the Real Food Calculator.

JMU kicked-off their week-long series of events with a Commons day, where local food-related organizations like Friendly City Food Co-op, Virginia Cooperative Extension and some of its organizational partners Master Gardeners, Master Food Volunteers, and the Family Nutrition Program, set up informational tables to show students what food initiatives are already in the area. They also kicked off their week-long Activism Table that features petitions asking congressmen to reform the Farm Bill and to support GMO labeling. They held a Photo Campaign and accepted applications for a school-wide cookbook that will be published and handed out for free after the week is over. Later this week they will screen a student-produced documentary on undergrads interning at alternative farms as well as "American Meet" followed by a panel discussion. Food activist and author of "Comfortable Unaware," Dr. Richard Oppelander, will lecture on the environmental impact of food choices in our agricultural system.

Baker University is celebrating Food Day with a full week of events under the name “Food in the Nude.” They kicked off the week on Sunday, October 23rd with Cornelia Floradistinguished professor of agriculture and sociology at Iowa State University, speaking climate change, food security and food sovereignty. They celebrated on Monday with a Real Food Information Fair featuring local organic farmers, diet and disease specialists, food activists, Baker Farm Hands, a Baldwin Food Pantry representative, and the dining services purchaser as well as a screening of the documentary, “Dirt.” The rest of the week will include a workshop on sustainable growing practices, a virtual farm tour featuring local growers and producers, a special performance on real food topics by a speech choir group and a volunteer day at farms in the area. This week is part of a general goal of building awareness and interest in the local farm industry and building lasting and valuable relationships between Baker University and the local farming community.

Lehman's Food Day was celebrated by more than 200 people on our campus. The theme was ‘Healthy snacking for students on the run’ and the goal was to educate students to make healthier choices. The main host, the Institute for Healthy Equity, has been trying to minimize the health disparities on campus and in the Bronx and eventually they desire to replace the current vending machine snacks with healthy options. The Institute and the Lehman Dietetic Club gave out free healthy food samples to help inform students about smart snack choices. The Cornel co-op demonstrated the sugar consumption in unhealthy foods and showed students that we can definitely cut the amount of sugar intake by selecting something else rather than snacks in the vending machines. Food Day helped us to encourage students to realize that real food is needed on the campus and the work students are doing with RFC and the Real Food Calculator are vital projects.

The University of Arizona celebrated Food Day with a Food Fest as part of a larger goal to improve the environmental quality of the food served on campus. Not only are they working to increase the amount of local and organic food served but they are also producing local native food. The first annual harvest of pods from campus mesquite trees took place in July 2011. As part of Food Fest, they screened the proactive film Forks Over Knives to a full house. Following the film we hosted a panel discussion with local food experts that weighed in on the documentary and other food-related issues. In addition, a locally grown, three-course meal was provided for the Tucson community during the Santa Cruz Harvest Dinner. A huge perk for students: “Eat Real” Cooking on Campus. Our celebrity UA chef, Tim Stevens, presented students with a food demo on how to prepare locally grown foods.  Wrapping up Food Fest, a tour of the University of Arizona’s Community Garden was available along with food and music during our Perk up at the Park event. Food Fest worked to initial “eating real” amongst students and the community.

On Food Day students at UWGB provided a free luncheon for the students, staff, and faculty with food provided by local sources. The menu included apple cider and pulled pork sandwiches as well as several sides. They also hosted local businesses and food groups who sold and gave away free samples off their menus. They were especially excited to partner with a new local food co-op called New Leaf Market that will be opening in downtown Green Bay. Food Day also provided them with a great opportunity to work more closely with the director of food purchases on their campus. He was able to connect them with local farmers and vendors as well as speak about the ease and availability of local foods in the area. Food Day was an extremely successful day for UWGB. They were able to educate students about the value of having real food in our dining halls and they hope this momentum will carry over to even more food justice work on their campus.

In celebration of Food Day, University of Alabama students will be spreading the message of real food to students. They are hoping to see their administration sign the Real Food Commitment, pledging to have 20% real food available in dining halls by 2020.The University of Alabama Environmental Council’s goal is to both build awareness and support within the student body for this commitment. They will be conducting a photo petition and passing out info about the six Food Day Principles. They will also be screening Fresh on campus and having a discussion afterwards. The students were able to get the University Dining, BamaDining, involved. They will be serving "real" food (local, organic, vegetarian, healthy) at three different dining halls and providing info on their real practices to students. After building support through the Food Day celebration, University of Alabama students hope that the administration will see the need to sign the Real Food Commitment.

Pomona College Dining Services celebrated Food Day by welcoming farmers from Weiser Family Farms to campus.  The dinner event featured locally and sustainably produced vegetables (purple potatoes, golden beets, orange Kabocha squash, watermelon radishes, baby DeCicco broccoli) from Weiser Family Farms and a presentation from the farmers.  Prior to the talk, students had the opportunity to meet with the farmers while enjoying the menu.  Pomona College Dining Services is proud to facilitate relationships between the farmers and students.

Lewis and Clark, Portland, OR

L&C Law School hosted a lunchtime speaker in honor of Food Day. Cathy McQueeney, from Friends of Family Farmers, spoke about the challenges and opportunities that independent farmers face in practicing sustainable and responsible small-scale agriculture - and how they get the delicious food they produce TO YOUR PLATE. We served a vegan-friendly potluck but also invited students and staff to bring their favorite real food dish to share. This Food Day event fit into Lewis & Clark Law School's push into the world of food and food policy - our Environmental Law Caucus has begun a school garden, and they have student groups working on sustainable agriculture and pesticide issues through the Northwest Environmental Defense Center. As a preeminent environmental law school, they're focused on ALL aspects of the environment - and they're excited to keep exploring food policy issues through events and initiatives like Food Day.

The Slow Food chapter at the University of Texas at Austin along with Oxfam, the Student Dietetic Association, and the UT gardening committee, hosted a showing of documentary "Dive!" at the UT community garden on Monday evening. Donations were collected to be given to one of Austin's prominent food banks. "Dive!" explores the world behind consumption; waste. The film follows 'dumpster diver' Jeremy Selfert as he exposes the unbelievable amount of edible food trashed in Los Angelos's grocery stores. Austin is a food-centric city, and this is reflected on the University of Texas campus. Slow Food holds bi-monthly general meetings to promote advocacy of local food. This semester, Slow Food has brought Jack Mills, a bee keeper in the area, and representatives from "Slow Money" to speak on campus. Slow Food and Oxfam both participate in the UT community garden and frequently volunteer at outside farms. For the national Food Day, the collaborators sought to emphasize the importance of discussing food insecurity, production, consumption, and waste. A catch-all, "Think globally, and act locally". Much love from the Food Day organizers at UT!