We're Taking Action Until Our Universities Do 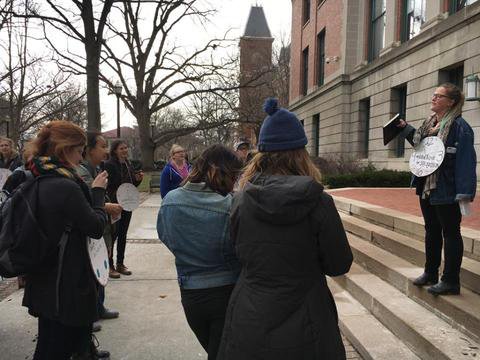 My name is Emily, and I am pledging to take action in the name of a more just and sustainable food system.

I’m currently a leader in the Ohio State Real Food campaign, but I’m also a new member of the RFC national Steering Committee--and if there’s anything I’ve learned over the past few weeks, it’s that this fight belongs to ALL of us! Here in Ohio, my own university is actively working to silence student voices and separate us from the community around us. It systematically denies us a voice in shaping our campus food system, and refuses to take responsibility for the role it plays in perpetuating a multitude of injustices, both within and outside of our food system.

But the thing is, this isn’t just happening here at Ohio State. It’s happening everywhere, at campuses around the country and even around the world.

That is why I am pledging to take action in the name of real food--and why I am asking five other people to join me--until my university acknowledges that our voices MATTER, and actually does something about it. My efforts alone are not enough, but together, we can END this broken and exploitative food system, once and for all.

This is my story, but it is the story of all of YOU, too. This is why I take action today. What about you?

Four weeks ago, I found myself marching into in the office of Ohio State’s president at the front of a 50-person crowd made up of my Ohio State crew, our allies from campus and Columbus, and students from around the Midwest. We were all holding giant cardboard clocks we had made by hand, ticking and chanting as we climbed up the stairs. We were there for one reason alone: to tell President Drake, once and for all, that there is #NOTIMETOLOSE for Real Food!

This scene—despite some new faces and the addition of giant clocks—wasn’t really anything new for the Ohio State Real Food team. My friends and I had been coming to this office every week for the last five months, demanding a meeting that the administrators had promised us back in August. We’d sent emails and letters from around the country, collected valentines and delivered cookies, hosted rallies and parties on the building’s steps, and even made a video. But the thing is, five months had passed with still no meeting, and this run-around was getting really old, REALLY FAST.

The process of visiting Drake’s office was routine by now, but our action that day was NOT routine. We intended to change the tone and direction of our campaign, demonstrating that we will take action, until President Drake does.

We marched up the marble stairs to Drake’s office, our chant of “No Time To Lose” echoing off the walls. We were told that Drake was traveling abroad (although later, upon reviewing the locations on his Twitter feed, it seemed clear that this wasn’t actually the case...). But either way, we were committed to delivering our message, and had several folks taking video of it. One by one, each of us stepped into Drake’s office and explained why we believe we have NO GROUND TO LOSE and NO TIME TO LOSE for real food--not only for the students at Ohio State, but for our allies who are organizing around the country, too. There is no time to lose for those fighting for farmworker justice, for climate change, for our local producers, and for hundreds of other causes, as well. Everyone who spoke had their own reason, their own stake in this fight.

Five of us had committed to staying in Drake’s office until we got a meeting scheduled. The rest of the group dissipated slowly, chanting again and again, “We’ll be back!”

It quickly became clear that President Drake’s staff couldn’t--or wouldn’t—do anything to help us. We kept pushing, hoping to get something done anyway, but then they beckoned to someone in the back—and a cop sauntered out, hands on his hips and scowling. He was practically twice my size, and even the air AROUND him seemed nothing short of terrifying to me. Suddenly, a quick visit to Drake’s office had just gotten a lot more serious.

I knew, even before the cop started speaking, that we would have to leave the office immediately--or we would be escorted out, by force.

Not only had the administration said “no” again, but they had also brought law enforcement officers to make us leave a public campus building. Perhaps they would have simply escorted us out...but what if we had stayed in the office anyway? What if we had actually been arrested??

Although this encounter was unsettling, as time went on, I began to find it strangely empowering, too. The Ohio State University--a multibillion dollar public institution!--finds its own students threatening enough to actually kick us out!

It was wild to think that I, Emily Evans--a quiet, friendly girl from rural Ohio--was facing down THE LAW in the name of justice! The idea, although laughable at first, has really given me food for thought. It deeply clarified how urgent and essential this campaign is, and made me realize how far I am personally willing to go for Real Food.

Here I am, a kid who grew up avoiding conflict at every cost, ACTIVELY engaging in a fight that was much more important than I ever could have known. This was no longer just a fun club that I went to after class, or a good cause that I tried to support. No. This was my FIGHT.... Mine, yes, but also the fight of so many others.

When the Ohio State University ignored our request for a meeting that day, it wasn’t just denying our sense of student voice. Ohio State was also denying the voices of ALL people who have been exploited and oppressed by an unfair food system--a food system ultimately built on a legacy of plantation logic: the exploitation of land, seeds, and people for profit.

My school wasn’t just opposing a policy of transparency and accountability, but was also trivializing the suffering of millions of people, animals, and even the earth itself.  This realization shook me to the core.

Because if even my own university--supposedly an institution of free thinking, education, and democracy--is willing to ignore and silence the voices of its students, what else is it willing to do?? Ohio State is not just ignoring our campaign, but the campaigns of our student and community allies, as well. By denying our campaign’s voices, OSU also says no to every group fighting for racial justice, for a fair and transparent energy policy, for an end to gentrification around campus, and everything in between. We are all in this fight together, and when one of our allies is denied their voice, so are all the others.

My encounter with the police (however tame it was in hindsight) was the nudge I needed to realize that real food is ABSOLUTELY WORTH spending my life, my career, (and perhaps even my arrest record?) actively fighting for. We only have this life, this planet, and THIS MOMENT to create a more just and sustainable food system. It is our responsibility to take it, run with it, and make whatever changes we can.

My friends, your voice--as a person, and as a student--MATTERS. Real Food Challenge isn’t just a club we’re a part of, or a nice cause that we want to work toward when it’s convenient and fun. No. This is a STUDENT MOVEMENT, and as I saw firsthand during our action, universities can actually be scared of us. When we speak with a loud enough voice, they are forced to listen. This is about claiming and building our power, together, with our fellow student organizers, with farmworkers, with local farmers, and with each other, all across the country. This is about all of us.

At Ohio State, we’re in the midst of planning our escalation strategy for the rest of spring semester. We’re not sure what our action will look like yet, but we’re prepared to do whatever it takes to guarantee a win for our campus food system. Who knows--maybe we’ll even risk arrest? Because in the end, we have no ground to lose, no time to lose, and absolutely everything to gain. That’s why I’m pledging to take action this spring, and to I’m asking at least five people to join me. When we act together and support each other in the fight, I have NO doubt in my mind that we will win!!!